Twelve noon, the announcement from the captain says, “Ladies and Gentlemen, We will be landing on time to Chicago Midway airport.”  As he is speaking I gaze out the small oval shaped window to my left, looking out at a sea of white flat clouds against an azure sunny sky.  I imagine myself aboard, not this (737 jet), but a 47 foot Beneteau named Nemetona.  Sailing through the clear horizon, with no destination in sight.
10 minutes earlier I had fallen asleep reading An embarrassment of Mangoes by Ann Vanderhoof who chronicles, in a wonderful way, the inception to the completion of living on a sailboat in the Caribbean for a year or two.  (Their plan was two years but she told people a year or two, so if she chickened out after a year – it wasn’t seen as a failure!) 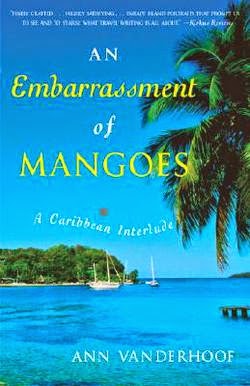 As you can imagine – the beauty of this thought and the horrors of this thought inter mingle.  Funny thing is we had friends doing just that, with three kids.  It is our friendship with the Patronus crew that changed our foundation as a couple.  In the summer of 2012 the Conway’s first stop was Newport, RI to spend time with our family for Fourth of July (and more).  Over some sharing of hopes, dreams and wine they challenged David and I to shift our thinking.  To see what they had been moving toward when they decided to buy a sailboat and take a year off.  They knew these precious years when the kids were young were flying by and they wanted to share an incredible experience in their lifetime with their children.  One that will forge the personalities and independence of these three amazing souls and for all the other reasons you can imagine.

In short they convinced us (maybe the more appropriate word is challenged us) to LIVE life now.  Why wait for retirement to do some of the things we were discussing.  During these discussions (which spanned more than one evening and more than one glass of the loose juice!) David’s clear dream when we retired in 25 years would be to own a sailboat.

Now understand my loving husband is a Kiwi (New Zealander) who grew up sailing, who came to America as a sailor with Team New Zealand who won the prestigious America’s Cup Races in 1995.  He met me doing a regatta from Newport to New York City where I was working at the time and is now a Sail Designer for Quantum Sails Design Group.  (Could we get any more into sailing than this man??!!)  So during these discussions – the thought of sailing with my husband seemed dreamy and challenging (I like a challenge and to learn new things.)  Yes you heard right – to learn NEW things.  I, as you should know, am not a sailor.  I grew up in New Jersey, the Garden State surrounded by trees, catholic school, a pool in our backyard and soccer in my blood.  Yes there is shoreline in New Jersey, but I only went there after prom or for the day with girlfriends to hit the board walk (and my beloved roller coaster!) and a few family vacations over the years.  NOTE: there is nothing in here that says sailing, sail boat or even motor boat!   So you would be correct to assume that I never heard of the America’s Cup.  I did not even know where New Zealand was when I first met David.  (Yes!  I am geographically challenged, I knew I wanted to see Australia one day, but did not realize there was a significant land mass down under, under.)

Upon hearing of David’s dream, I was sort of intoxicated by the thought.  These late night discussions shifted something within me, deeper than all my self- transformation books I was reading at the time.  It went along with the theme I had discussed with David on our anniversary that year.  I told him “I Love You, but if the next 15 years are going to be like the last 5, I don’t think I can do THIS anymore.”  I had not found someone else, I was not running off with a sect, I simply found ‘myself’.   For many years I was lost in the myriad of mothering by myself (David travelled ALOT!) and had lost a large portion of what made me happy.  Through much self exploration and self help books I discovered something so simple…..I wanted to be like the person I grew up being.  The one with daily laughter, spontaneity and relaxed family moments – and our track record of this with our family of four was dismal.  With all of David’s travelling and sailing with customers, he and I were at a disconnect.  Which for me meant we had a severely disabling ‘disease of the communication base’ of our committed relationship.   We were very polite roommates lacking passion…and I was tired of it. Not, ‘tired of it’ exclamation point, but ‘tired of it’ with an exhale.

So as we sat around our family dog bed (A huge 6 foot in diameter bean bag chair/sofa…lovingly resembling a dog bed in our living room – apparently I am spatially challenged as well!) Chris and Erica led us through their journey of coming to their ultimate decision to take a year and sail around the Caribbean.  They mentioned many of their OWN obstacles they had to surpass and then once that decision was made, they explained how they handled/ deflected all the opinions, obstacles and worries others were throwing at them.  I found it odd that people would not be supportive of a couple’s decision to do something out of the ordinary.  David and I were 100% supportive and ‘on-board’ with their decision since the words floated out of their mouths the winter prior.  We respected their journey, their process, their place.  We did not pour onto them our own insecurities or fears….we simply believed and were in awe. 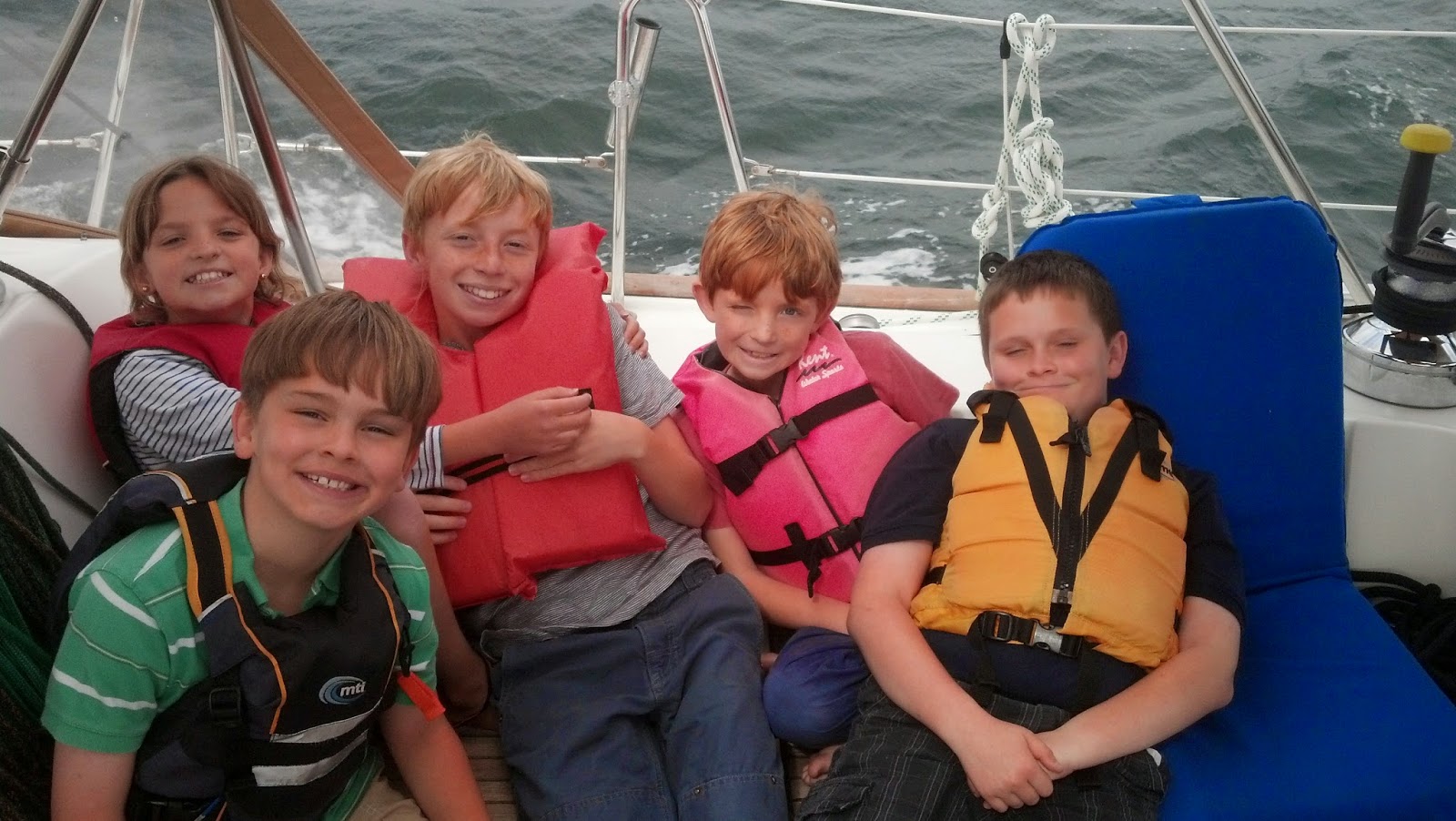 The Conway’s had left us around mid-July to travel up to Maine, which left David and I discussing and ruminating about how we want to live our life, and live our life right NOW.  This theme became a repeating echo in our minds which was strengthened yet again when Patronus came sailing back into Newport Harbor in early September for a weekend overnighter on the boat.  (YEP all 9 people on a Beneteau 473, and yes we all fit comfortably as a matter of fact!)   If our own conversations that summer did not make it clear we needed to put some of this talk into action, the weekend over-niter did!  It was like a trampoline effect; the heavier the idea - the deeper the sink - the higher the bounce.  Talking, then experiencing the joy of the wind and no one getting seasick helped our kids and myself fall in love with sailing.  This Bristol trip really bounced us into action.  We made an intention we would try to meet up with them in the BVI’s in the spring of 2013.  You know to really ‘test out’ if a sailboat was our calling.

By the time Chris and Erica left to begin their trek south, David and I began looking on BOATING WEBSITES to see what was out there.  You know to get a ‘feel for the inventory’, to see if this ‘dream could be a reality’, to see if the ‘dollars met the asking prices’.  We made a rough plan:
1.      During the Fall, peruse the boats online.  Maybe even go see a few.
2.      List out our wants for a boat, like how many berths, how many heads, how long, etc.
3.      In the spring, plan a trip down to the BVI’s to meet up with the Conways and charter a boat to see if we, as a family, could really enjoy doing the sailboat thing.
4.       Then maybe in the summer of 2013 – if all works out – purchase a sailboat.   Part of this beautiful reality would be that in 20 years (note this is 5 years less than retirement age) it would be paid for and we could just sail off into the sunset anywhere our hearts desire without boat payments!  Nice plan huh….yep you bet.

OK – having a plan is a great idea and all the logical minds would say, ”that makes sense”.  But as they say the best laid plans…..

Our perusal of the boat listings and David’s keen eye led us to a vessel in New Jersey by October!  He drove there on his way to an event in Annapolis.  And when he called from the boat, I could hear it in his voice.  The same voice he had when speaking to his mom long distance on the phone after our first son was born…..his words sweet and with the sound of all hope for the future!

I knew he found something special, yet when I asked him about the boat his first words were “Lana, it has good bones”.  (OK, OK – THAT first line is like hearing “Hey Lana I have set you up on a blind date”.  I say “Yeah great. What’s he like?”  And you say “He is got a great sense of humor”.  Drum roll and Cymbal please!)

His voice though – his voice is what I remember about that moment more than the rest of what he was saying in boat lingo (remember I am not a sailor).  I knew he was hooked on this one.  Of all the ones we looked at in Newport this was the first time I felt promise.  It ticked off everything on our immediate list:  Three berth, 2 heads, bow thruster, 47 feet etc….How we ended up with this list is another story for a different time.

Just know the purchase of this vessel started us thinking of the bigger picture......our own cruising adventure.

Thank you for leaving a message!